Dig into this delicious cherry rhubarb crisp baked in mini skillets. Made with tangy and sweet summer fruit smothered in a crunchy oat topping. Served with ice cream, this gluten-free dessert is a real treat! 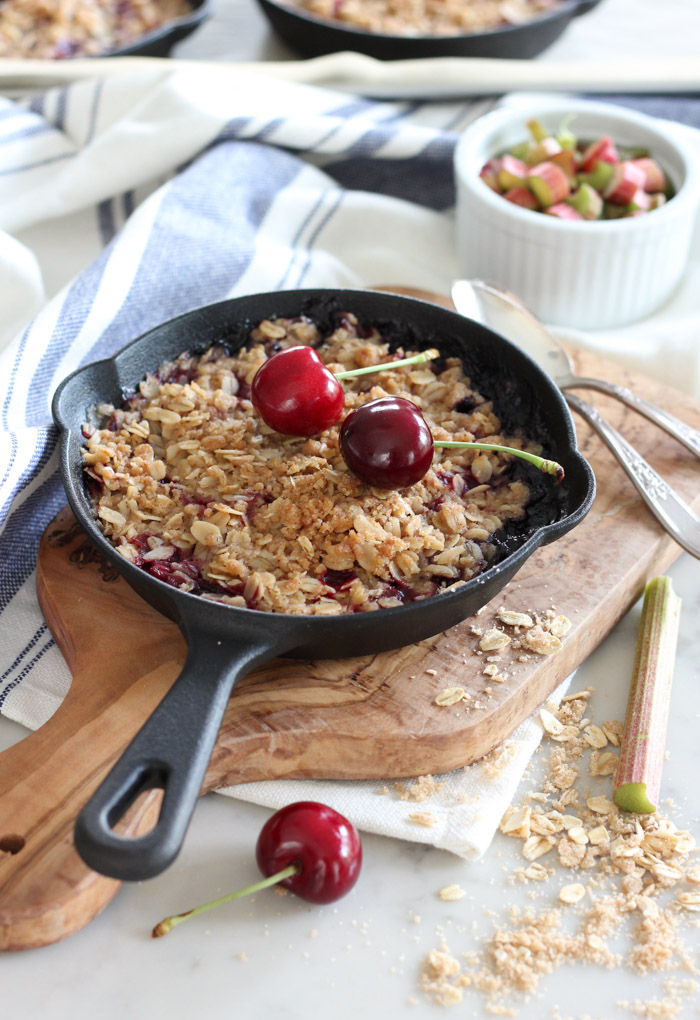 Are you enjoying summer so far? Although it still feels a bit strange, we’re making the best of it. One of my favourite parts of the season is being able to take advantage of fresh garden produce. On a recent visit to my parents’ farm, I was fortunate enough to leave with a large bundle of rhubarb thanks to my niece. I LOVE rhubarb desserts!

And, of course, cherry season has just begun, so making cherry rhubarb crisp seemed like a no-brainer.

Today is the last post of this year’s Summer Seasonal Simplicity series put together by my friend Krista. Be sure to read to the bottom to get even more summer recipes you can try over the next few months. Yum! You can also check out my summer drink and craft project if you missed them. 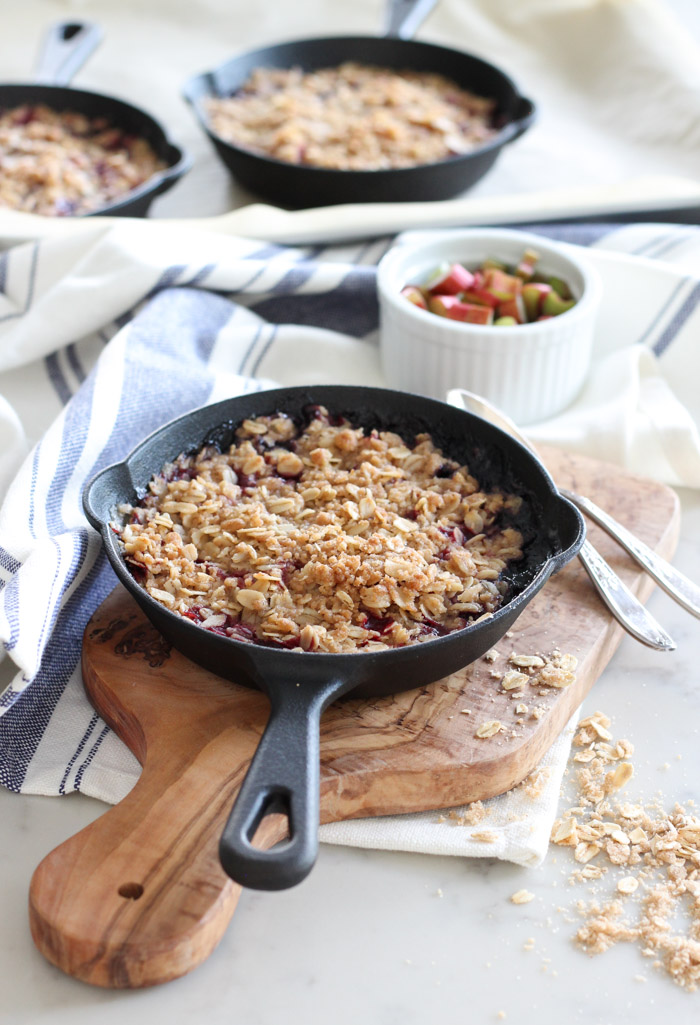 If you’ve never made a crisp before, it’s one of the easiest desserts you’ll ever put together. Usually I dump a little of this and a little of that, but I managed to write the exact recipe out for you. It’s gluten-free too. 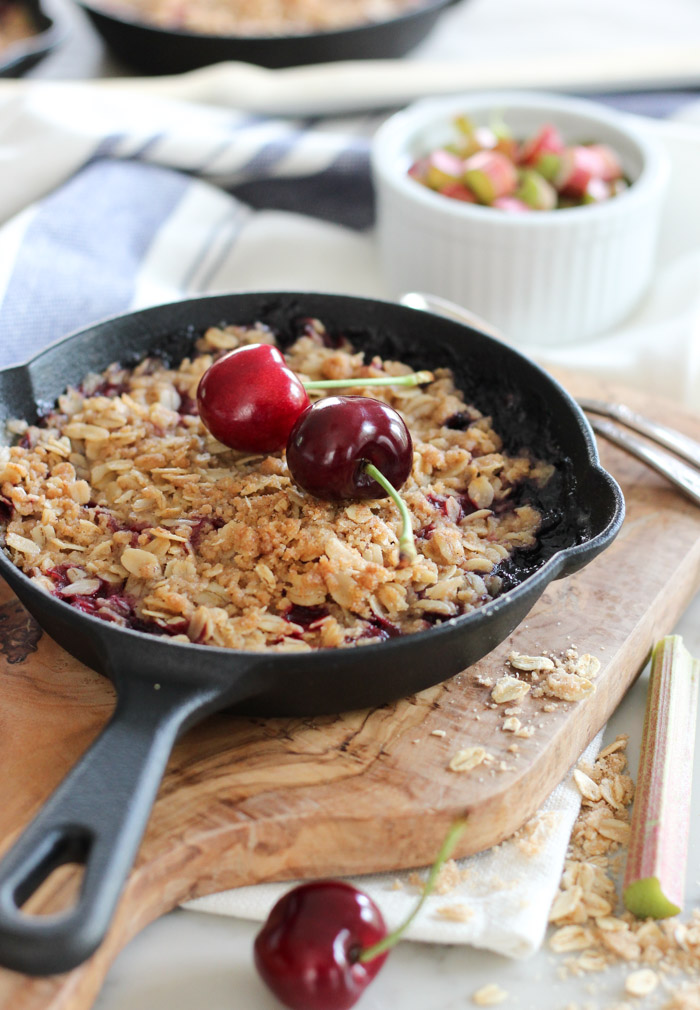 I decided to bake it in mini skillets (just like these chocolate chunk skillet cookies), which always remind me of summer camping. Each one is a very generous dessert portion (but who’s counting), or simply divide it between two. My husband would look at me right now with those “Seriously?!” eyes. Oh well. He loves his desserts ;)

With Canada Day tomorrow and Fourth of July for my US friends to follow shortly, dessert is covered. You can even get a jump start by preparing the fruit bottom and crisp topping and keeping in the fridge until you’re ready to bake.

Don’t have any mini cast iron skillets? Use a regular size pan or pie dish instead. Easy peasy! 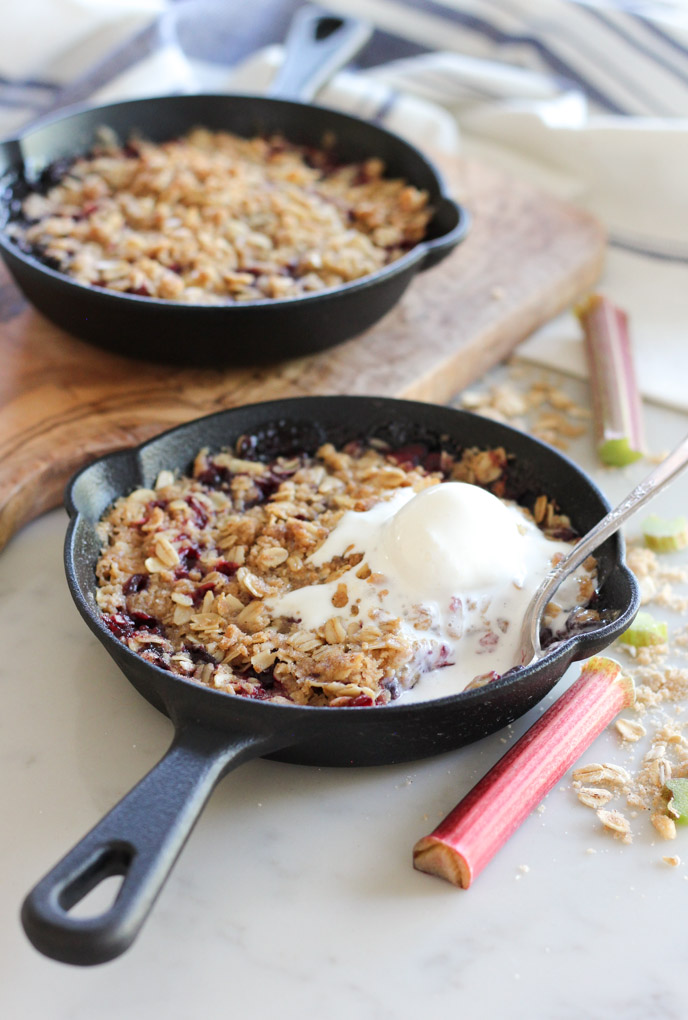 Around here, we like our crisp served warm with a bit of vanilla ice cream or frozen yogurt. You?

Tangy, sweet, crunchy… This dessert really is a scrumptious combination! 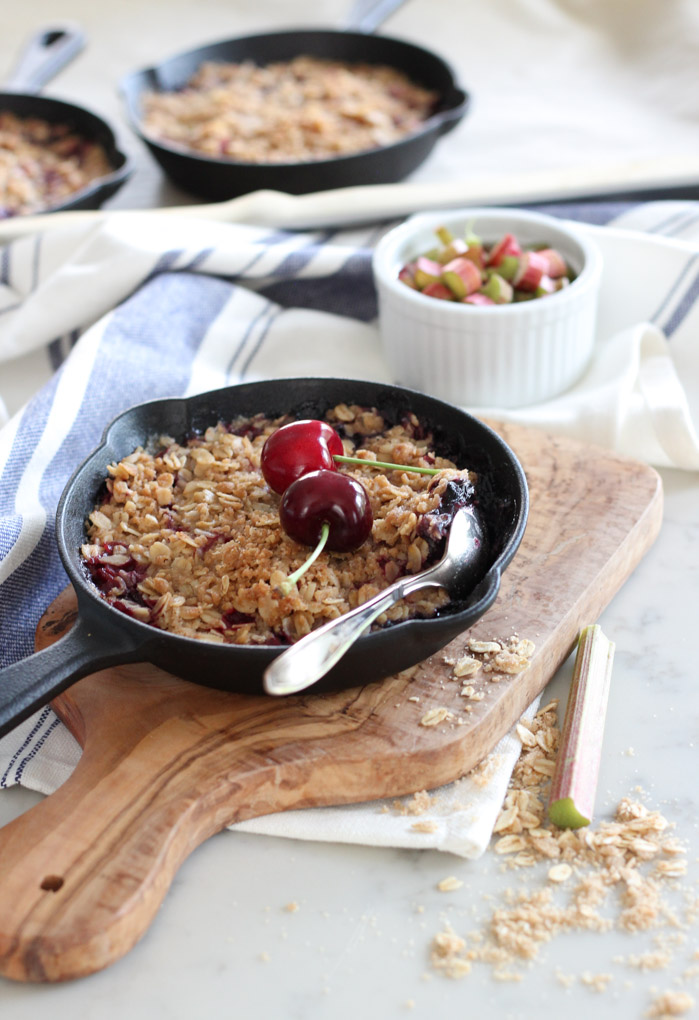 Okay, now let’s see how easy it is to make this summer dessert recipe…

Some links for supplies I used in this post are affiliates. If you click through and take action, I may receive a small commission at no additional cost to you. Please refer to my disclosure page for more information.

How to Make Cherry Rhubarb Crisp

The full list of ingredients and instructions are in the printable recipe card at the bottom of the post.

Start by tossing the fruit with cornstarch, sugar and cinnamon in a bowl. Divide evenly between 3, pre-seasoned cast iron skillets on a parchment-lined baking sheet.

Next, prepare the crisp topping. Add cubed butter, brown sugar, granulated sugar, cinnamon, oat flour and rice flour to a mixing bowl. Use a pasty cutter (or fork or your hands) to mix together until pea-sized lumps form. Add rolled oats, then mix until small lumps form. Spoon evenly over fruit and bake at 375°F until golden brown. 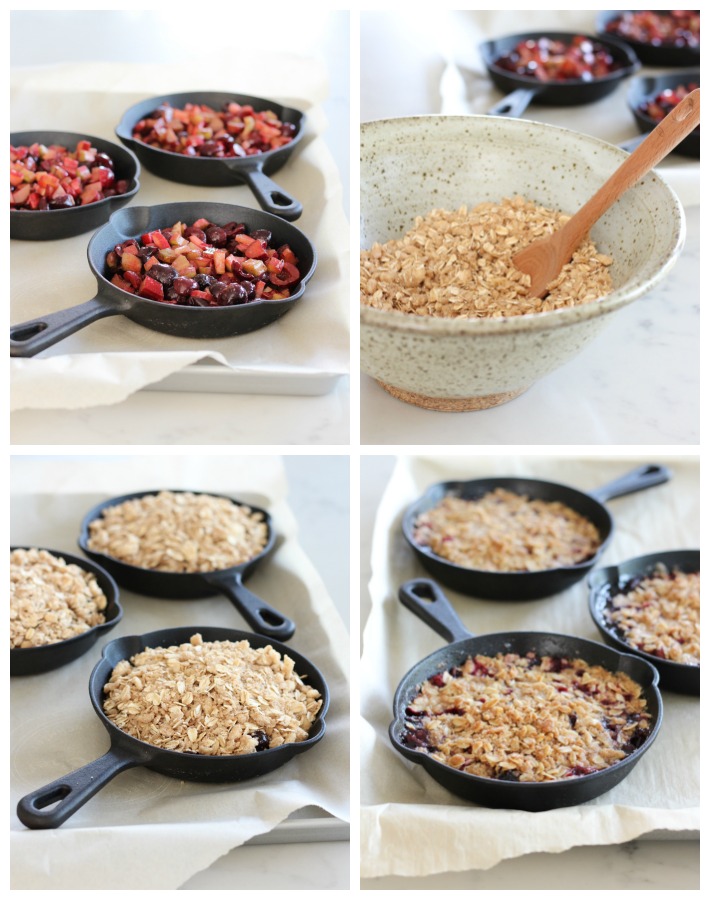 Some Notes About this Summer Crisp Recipe

Dig into this delicious cherry rhubarb crisp baked in mini skillets. Made with tangy and sweet summer fruit smothered in a gluten-free crunchy oat topping.

Ready to see my blogging friends’ favourite summer recipe ideas? Just click on the links below the images to get the full details. Enjoy!

Grilled Zucchini with Parmesan on the BBQ at The Happy Housie
The BEST Summer Salad at My 100 Year Old Home
Summer Corn, Blueberry and Avocado Salad at Cassie Bustamante
Lobster Rolls at Home at Finding Silver Pennies
Easy Skillet Nachos at She Gave it a Go

They all look so delicious, don’t they?!

Did you make this cherry rhubarb crisp? I’d love for you to share a photo on social with hashtag #satoridesignforliving or the “tried this pin” feature on Pinterest! Also, let me know how it went in the comments (with your star rating).